This is the story of our

July 2015. During the West Beach annual garden party for the over 70s, Rose, one of our regular guests, mentioned it was a shame that we only met once a year, and how lovely it would be if we had a little garden where residents could meet up more often and sit awhile and chat.

Later the conversation turned to the awaful state of the middle twitten, that leads to the coast road, seafront, schools and bus stops, also that it’s either waterlogged, or full of brambles, not to mention the mess left by a few unscrupulous dog owners.

Jokenly Rose said, “Maybe we could make the twitten into a garden”. We all laughed at this.

But was this really such a silly idea? 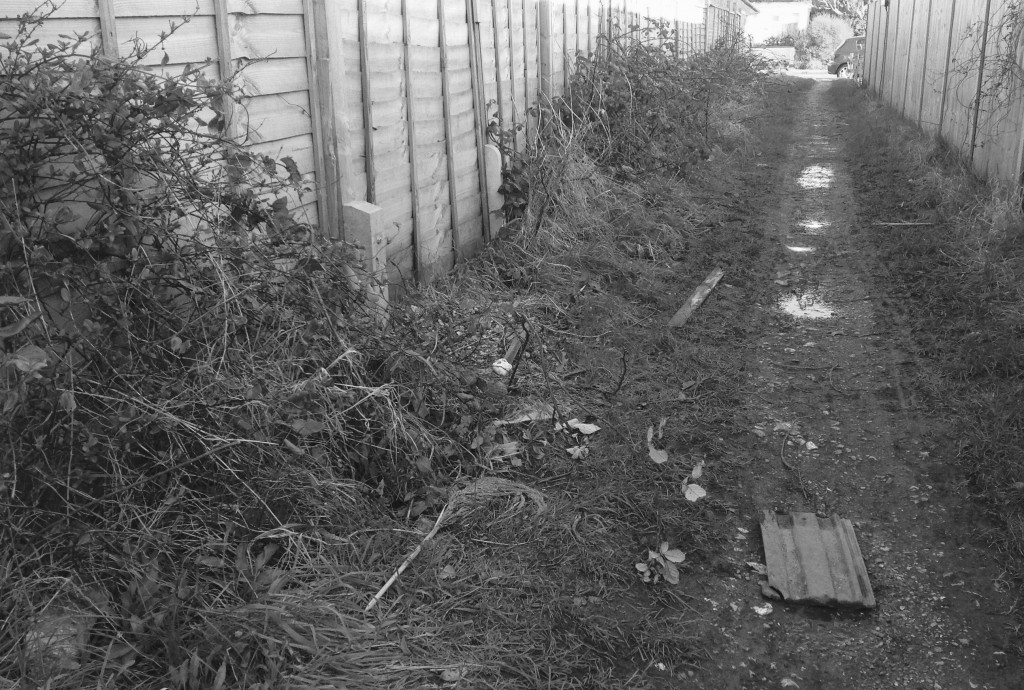 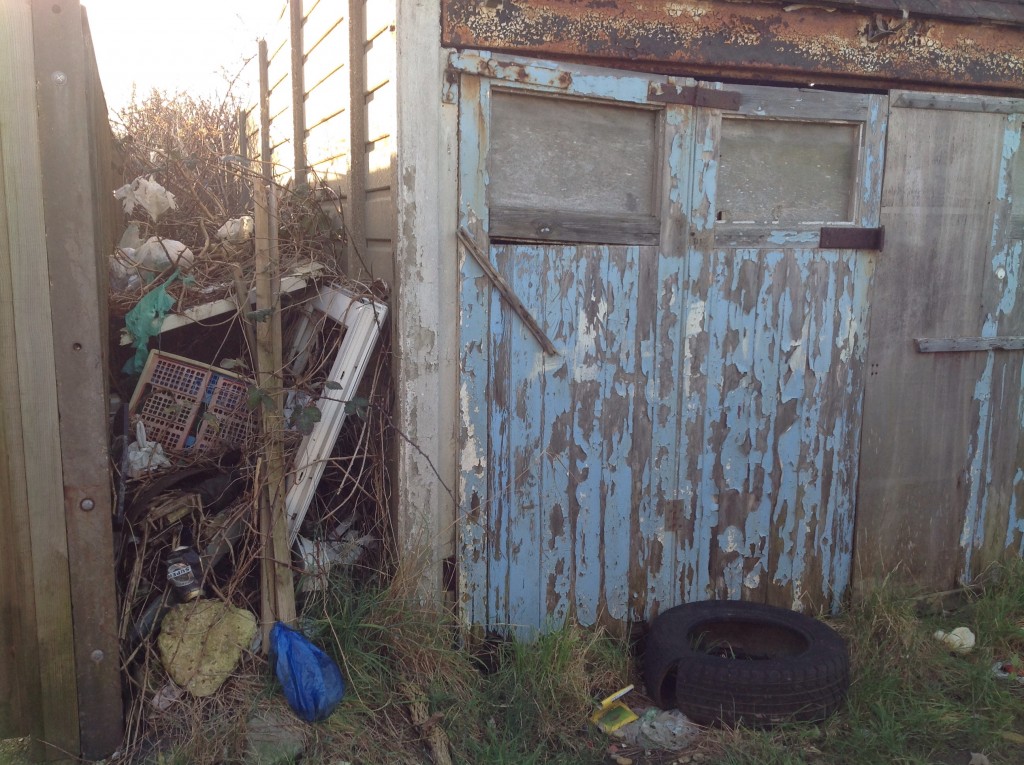 September 2015. Research showed it was actually possible to obtain a grant for community gardens, so with this in mind, at the next Residents Association meeting the committee decided we should apply for a grant.

Unfortunately on the first application we were unsuccessful.

The successful applicants would be informed during January 2016. All we could do now was wait…

January 2016 arrived, with good news! We’d been awarded the full grant of the £11,000 applied for. Although it seemed a large amount of money, we had a huge task ahead.

So on the back of this success, we also applied to the Sussex Police Community Safety Fund for a small grant to be spent on solar lighting. Again we were successful.

The hard work was about to begin.

I’ll skip the boring parts, the tears, trauma and tantrums!

From here on the photos tell the story. 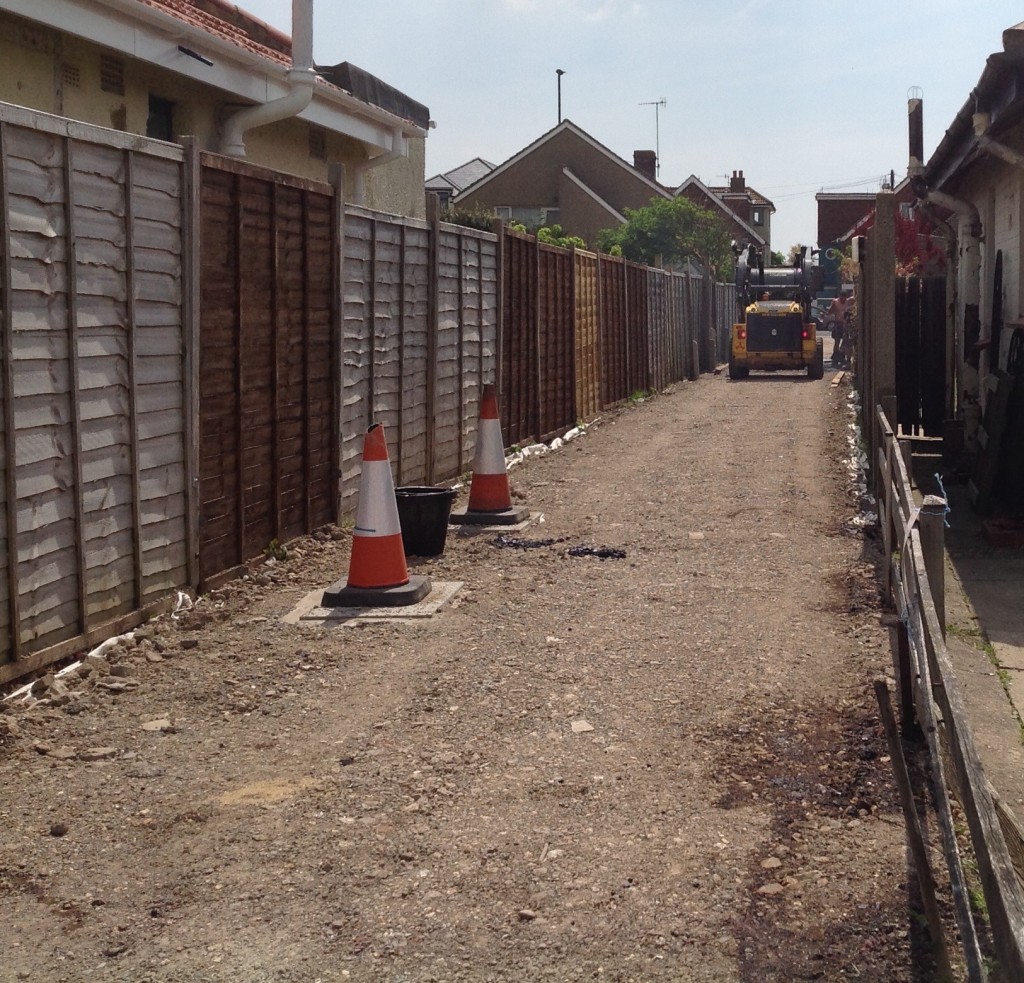 Rubbish removed and the site is looking a lot bigger 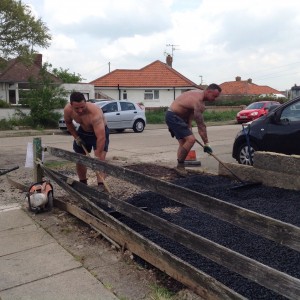 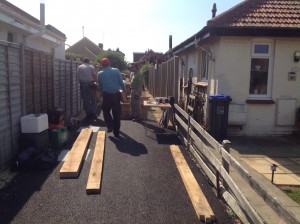 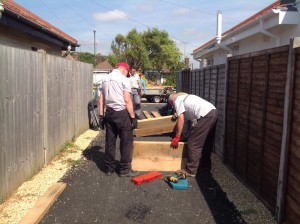 It doesn’t go there mate! 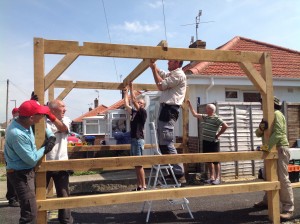 Hurry up Darren, this is heavy! 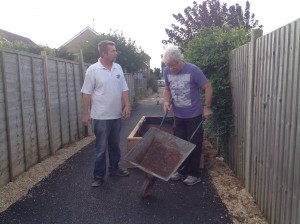 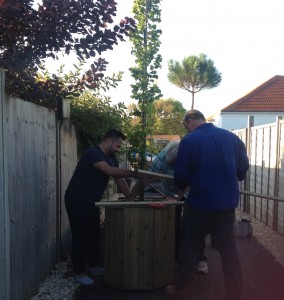 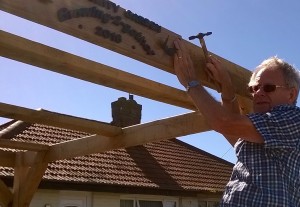 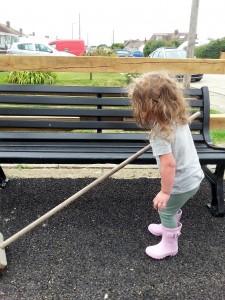 I’ll show those guys how to sweep up.

SINCE WE APPLIED FOR THE GRANT!

Sunday 2nd October 2016…The end of a perfect sunny day.

All plants now in place and looking fabulous!

Come springtime the wallflowers and bulbs will be a delight. Not to mention the scents.

Monty Don would’ve been proud of the community workers this morning,

toiling away in the warm October sunshine. 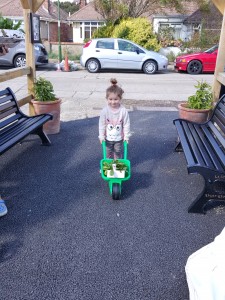 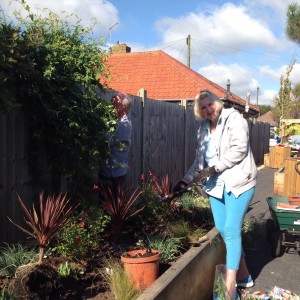 Trish and John getting stuck in. 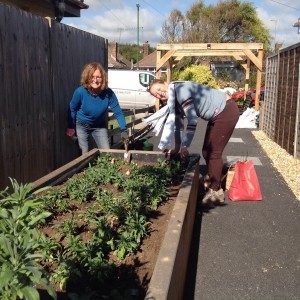 Francis and Pauline smiling in the sunshine.

Bed 2. Has been left bare until next year. Ready for herbs and edibles.

Bed 1. The seating aera has wallflowers and daffodils. For early spring delights.

The garden lighting is also in place, making it a nicer place to walk at night. 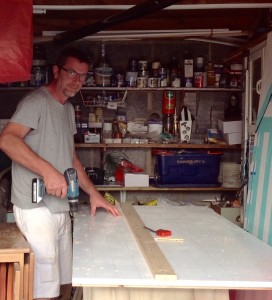 Above, Chris putting the final touches to the garden, we can’t wait to see it finished. “Carry on now Chris.” 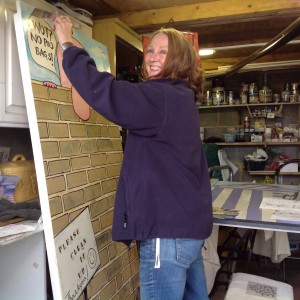 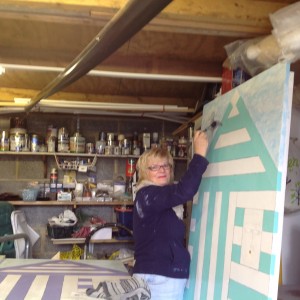 That’s me, painting one of three beach huts where Billy, Betty and Bertha our new garden residents will live. 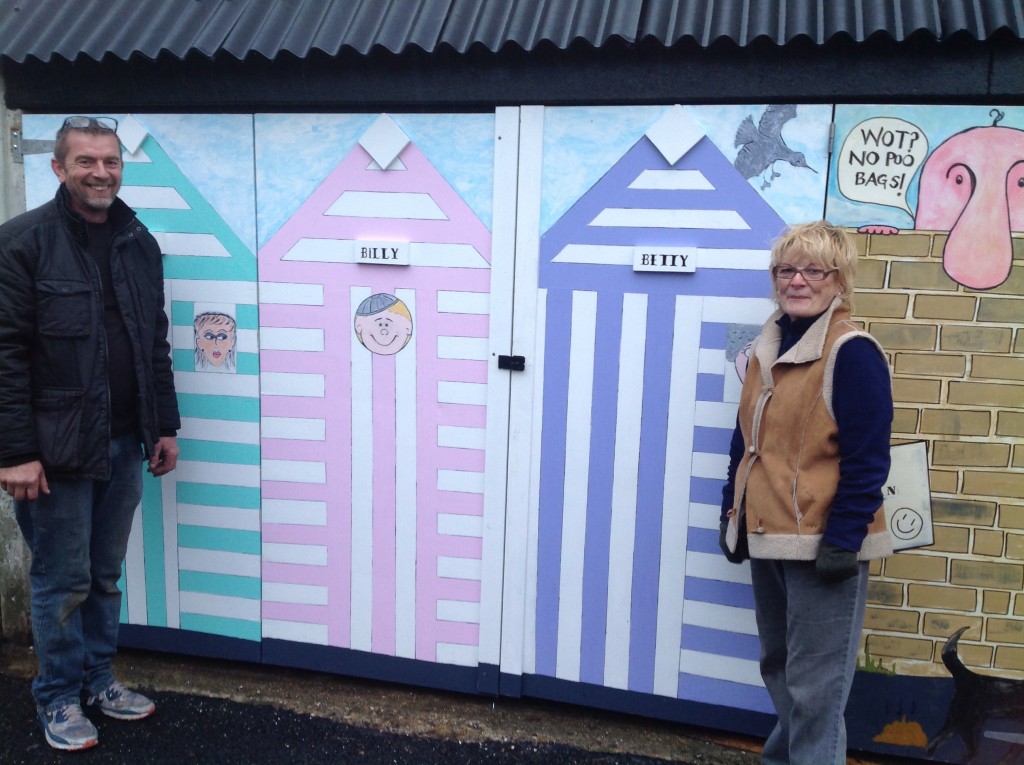 Artwork complete and finally installed. Billy, Betty, Bertha and Chad have moved in to the garden! Smiles all round after a hard day.

Committe members and residents who’ve worked so hard over the last year, are having a well earned rest today. We’re all looking forward to the garden launch which is planned for Sunday 30th October at noon.

If you’ve taken part in the ‘Growing-2-gether project’ in any way, no matter how big or small, then please join us in the celebration.

Launch day had arrived,  by 10am the sun was starting to peek through the clouds, thank goodness it was going to be a sunny day.

The atmosphere was buzzing. Committee members and locals busied themselves by hanging up the bunting and laying out the tables and chairs, not forgetting the food and all important drink.

Just before noon guests could be seen coming from all directions to join in the festivities.

Photo below… Cutting the ribbon to open the garden were West Sussex County councillor Janet Mockridge, and West Beach Committee member Lynda McShane, being helped by Cllr Mick Clark WSCC, along with Cllr Geoff Patmore ADC. Clapping away in the background and thankful most of the hard graft is almost complete, is our Residents Association Chairman, Chris Drew. 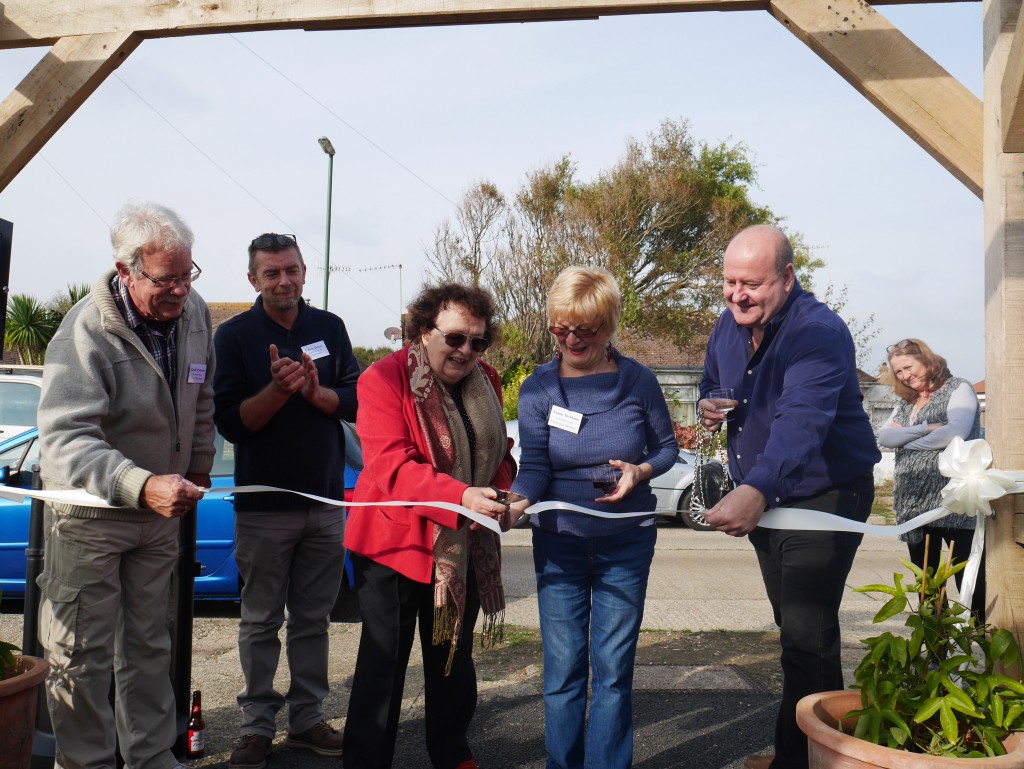 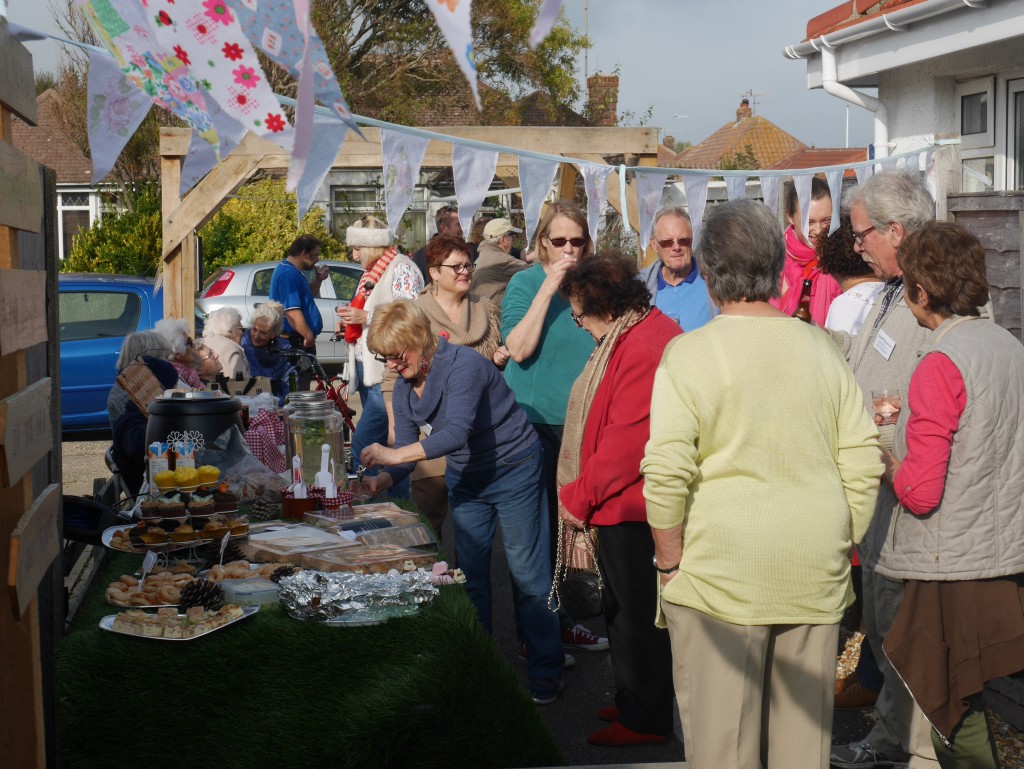 The launch party in full swing. 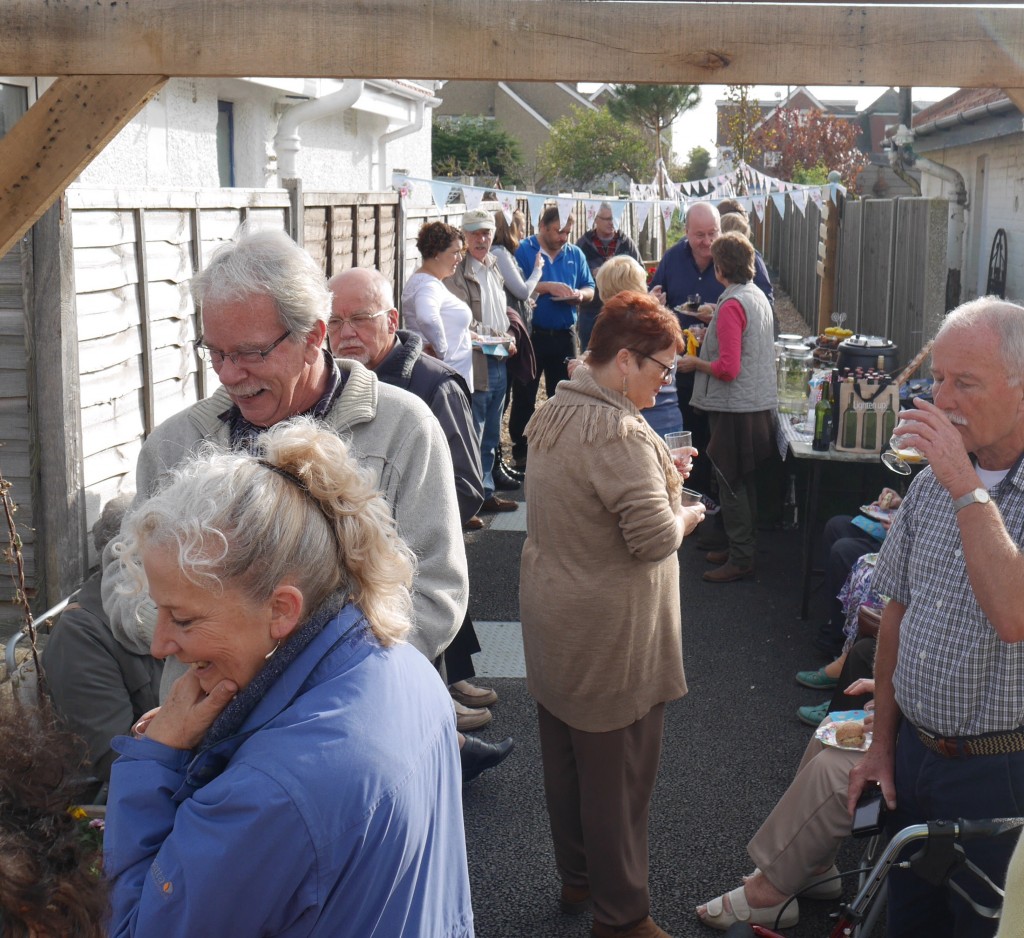 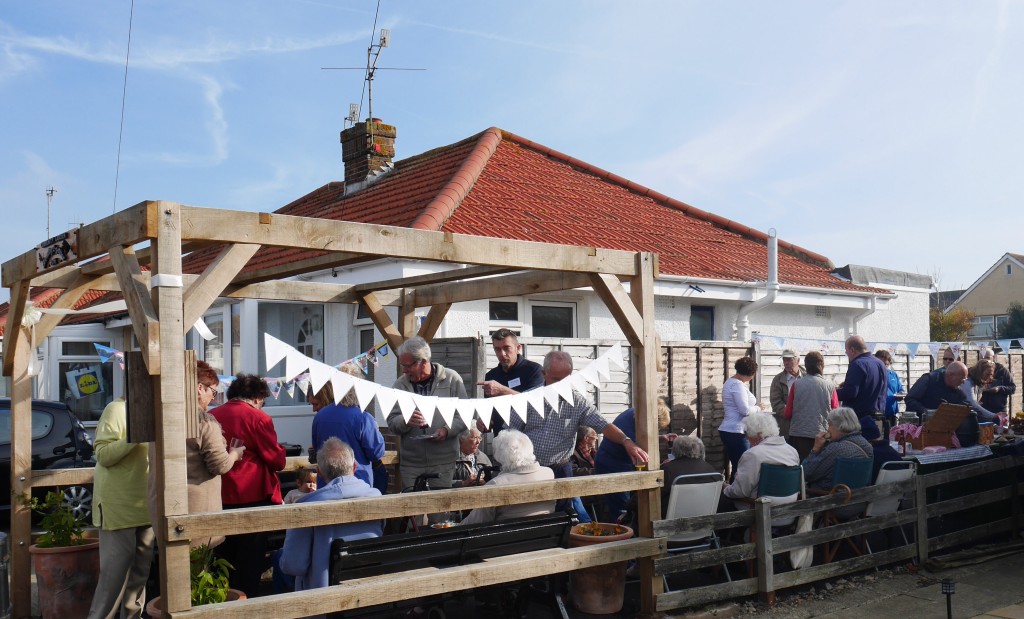 In the large terracotta pots seen here at the corners of the oak arbour above, we’ve planted passion flowers. Hopefully by next summer they should supply some welcome shade from the sun! If we are lucky to have some. 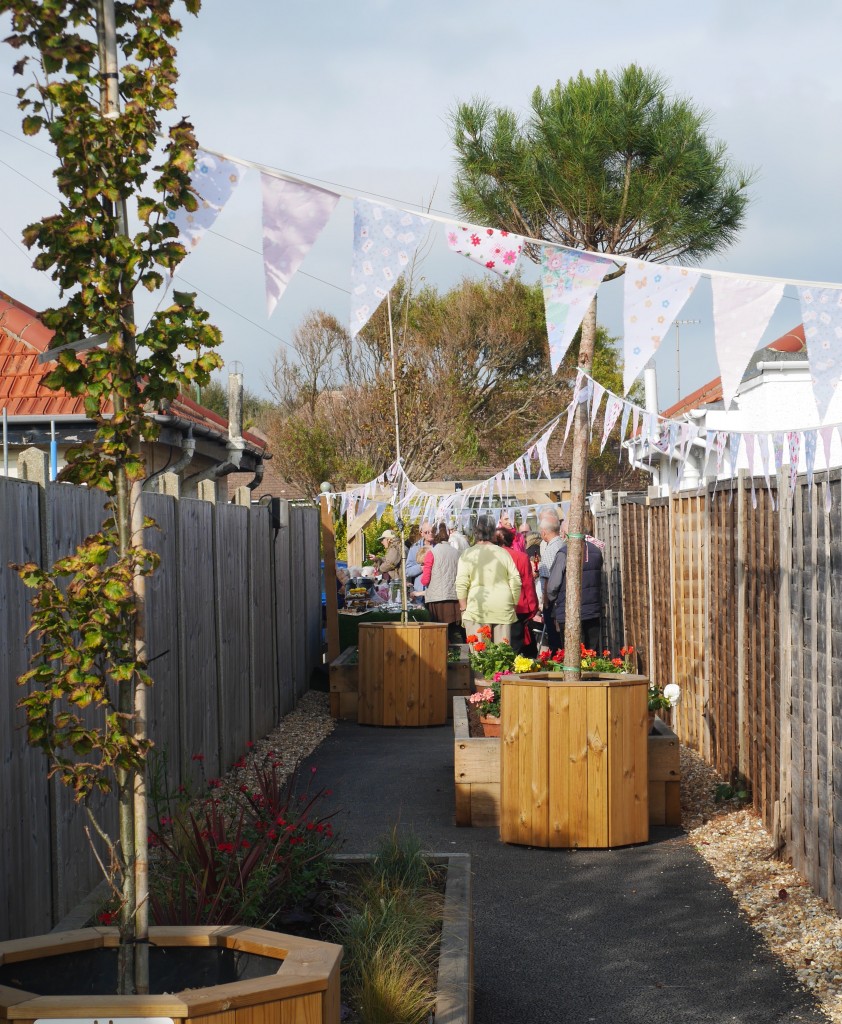 View of community garden from the south. 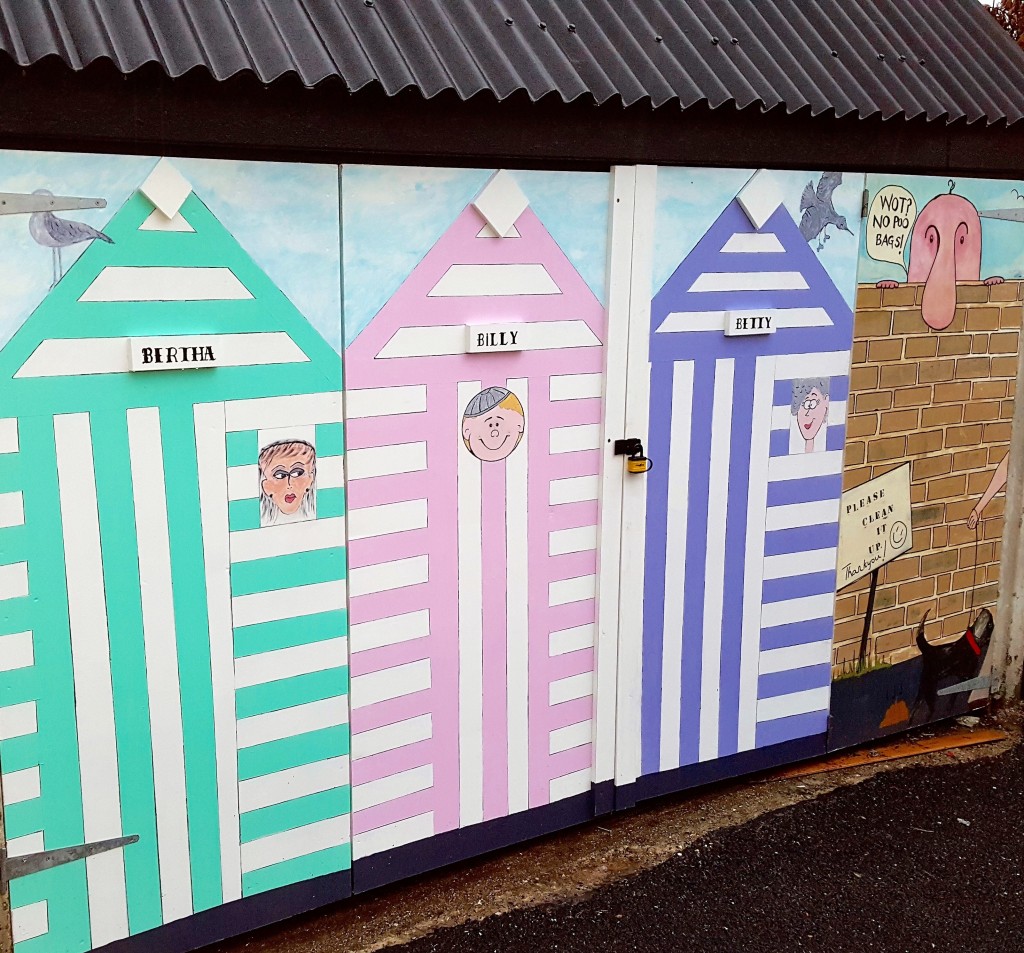 The new fun facade on the old doors, such a pity that seagull got his head chopped off!

There’s still a few things for us to finish in the garden. However next year it’s up to the West Beach community to look after the raised beds and trees. For residents to pull a weed or two as they pass by. If you’ve grown too many seedlings for your own use, please pop them in one of the raised beds.

If you need mint or a herb for a meal just take what you can use on the day.

We hope you’ve been inspired by our community story, there are many unloved small plots around the country…So if you’ve ever thought.

Why doesn’t someone do something about that plot of land, remember you are a someone.

So get started today because…

If you can conceive it

you will achieve it.